Chael Sonnen is set to face Forrest Griffing after the fighter made the announcement he is changing his weight division. 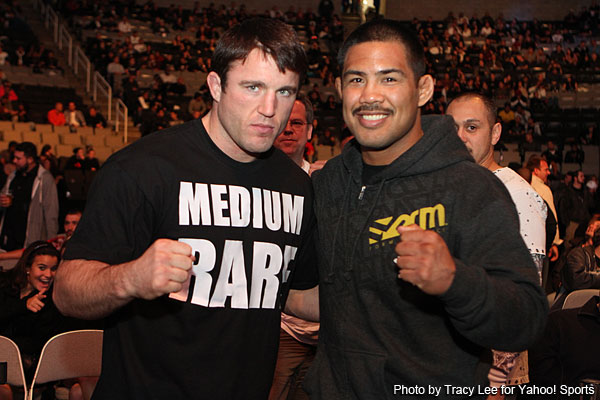 Sonnen, whose future in the UFC was uncertain courtesy of his TKO loss to middleweight champion Anderson Silver, how now decided to move up to a new weight division. Pundits see this move as a desperate move by the American gangster as he is fondly called to salvage his career.

Sonnen would now square up aginst Griffin having moved up to the 205lbs weight division. Sonnen told UFC reporters:

“Forrest is a guy who has beaten everybody, I’ve watched him win the (205-pound) world championship and he’s the one guy Jon Jones hasn’t fought.

“He’s beaten two world champions in his last three outings and on Dec 29 I will be taking on Forrest Griffin. That fight will be at Light Heavyweight.”

The fight slated for December 29 wouldn’t be the first time this two stars would be facing each other. The two players clashed nine years ago in a match Griffin won by submission. Hence, Sonnen knows how tough the encounter between the two would be.

Sonnen in preparation for his showdown has begun what he is infamously known for, Trash talking opponents, he wasted no time throwing jibes at John Jones. According to him, he could go up to 205 weight division to take on Mike Jones.

In the build-up to their fight, Sonnen would be hoping to avoid any slip up that would give Griffin an advantage when they face each other at the Octagon, as he had lost the match against Anderson Silva via a second round TKO, following a little distraction.

Elsewhere, former UFC heavyweight champion Griffin is obviously not ready to reply any verbal jibes as he is steadily preparing for his battle with Sonnen.